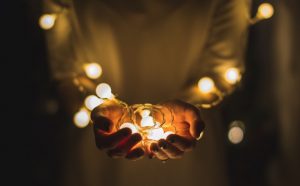 READING: “We grow accustomed to the Dark,” by Emily Dickinson

Either the Darkness alters —
Or something in the sight
Adjusts itself to Midnight —
And Life steps almost straight.

SERMON: “The Dance of Dark and Light”

I have a confession. About 10 days ago, I realized I had a case of the real Christmas Blahs. I just didn’t care about the holidays. I was not excited about Christmas this year. If those decorations stayed up in the attic till next year, so what? If no presents were bought or special meals made, who cares?

Then one night, as middle-aged people sometimes are, I was up at 3am. I just couldn’t sleep. So I did what you’re not supposed to do — I looked at my phone.

I opened my Kindle app, and the book that was right there, open, was Self-Compassion by Kristin Neff. And right there, waiting for me like the Universe had planned it, was an exercise she recommends for when you are stressed.

First, tune into your self-talk. How are you speaking to yourself? What tone are you using? Well, of course my self-talk was pretty harsh. I won’t repeat it here. Nobody needs to hear that.

But then I did the next thing she suggests, which is “listen for the feelings underneath that.”

And then it just came to me. I was feeling sad. I was hurting. And I didn’t even know it. I realized all at once that I was grieving that my family is changing.

You see, when my kids were little, a large part of my identity as a mother was attached to making for them absolutely magical Christmases.

There was that one time, when Lily was 6 I think, when I found on eBay — eBay was brand new then — a used dollhouse. Not a kids dollhouse, a used “adult” miniatures dollhouse. And I had to drive an hour to get it. And over the next month secretly I refurbished it. I painted it her favorite colors. And I found roomfuls of used furniture to go with it. And then finally a beautiful new doll family to live in it. And oh my gosh when she opened it, you should have seen her face! It’s one of my most cherished memories ever.

Then the next year, when they were 4, and 7, and 9, I got them a dog for Christmas. Not a puppy, a full-sized adult rescue dog. A tri-color border collie named Buddy. And I actually got the fosterer to deliver him on Christmas Eve, after the kids had gone to bed. So on Christmas morning, when they came running down the stairs, and a big black dog came running up at them, there was a LOT of screaming.

After a few days, things calmed down a bit. And we all grew to love Buddy like he was the center of our family. And we gave him the best five years of life a dog ever had.

But this year, it’s different. Now they are 14 and 17 and 19, and Christmas is a negotiation. This year it was a transaction that took place in October.

They only wanted big things — an iPad, a computer, and a trip to Rome. (To be fair, Lily has been studying Latin for three years, and this is her class trip.) But this is it — all their birthday and Christmas and Hanukkah presents for the whole year, all decided in October.

So now in December there’s nothing to wrap, nothing to put under a tree, no surprises. And I’m sad about it. Just a little.

So I breathe in, and breathe out. And let it pass through me. And a few minutes later, I’m okay again.

Now I know many of you are carrying much bigger hurts right now. People in this congregation have lost much more this year — spouses, parents, jobs, their health. My little grief is tiny in comparison, I know that.

And also I know that we shouldn’t compare. All grief is different and valid and worthy of compassion and care.

Whatever we are carrying, it’s just hard, and the holidays can make it harder, because we’re supposed to be happy and joyous all the time. And we’re just not.

And if that weren’t already enough to trouble us . . . the UK went to the polls this week. And it’s starting to feel like 2016 all over again.

That was the year my family and I earned British citizenship — because we wanted European citizenship, for all it might end up helping our kids in the future — and we finally got it just two weeks before the Brexit referendum. And then that November, we all remember what happened here, we cannot escape it. And how commentators linked the two elections, as part of a worldwide trend.

Since then, in the three years hence, we had thought the Brits had learned their lesson, that they’d seen through the lies.

Albert Camus once wrote “there is no love of life without despair of life,”

And that feels true. Some hopes will get dashed. Love always brings with it grief. Families have problems, churches have problems, societies and cultures have problems. There is no light without darkness. In fact, it is the darkness that makes the light so necessary, so bright. The two are intertwined, enmeshed in an eternal dance.

And that understanding, I think, is the beginning of acceptance.

When it comes to the hard things, to working on acceptance, I sometimes find comfort in Buddhism, especially in the writings of the American Buddhist nun Pema Chodron. Thousands of people have turned to her now-classic 1997 book When Things Fall Apart.

In it Pema Chodron writes:

“Things falling apart is a kind of testing and also a kind of healing. We think that the point is to pass the test or to overcome the problem, but the truth is that things don’t really get solved. They come together and they fall apart. Then they come together again and fall apart again. It’s just like that.

The healing comes from letting there be room for all of this to happen:  room for grief, for relief, for misery, for joy.”

In Western cultures we tend to think of life and history as linear and progressive. We are on a one-way path of self-improvement and social uplift. Onward and upward forever. You can see how colonialism dovetails nicely with this worldview.

But Eastern cultures tend to think in circles and cycles. Buddhism, an Eastern idea, reminds us that we’ve been here before, that life is constant change, that “progress” ebbs and flows and cycles back again.

Buddhism says we are not in control, and thinking that we are makes us crazy and exhausted.

The truth is that things don’t really get solved. They come together and they fall apart, again and again.

This holiday season, can you let there be room for grief and misery and joy?

In this season of darkness, of change and loss, of looking forward to a new year, an election year, can you accept and allow the not-knowing

and the fear that comes with it?

Pema Chodron says: “Only to the extent that we expose ourselves over and over to annihilation can that which is indestructible be found in us.”

She means: To build strength we must take risks. It’s only by venturing forth into the darkness, by allowing and accepting our fear of the unknown, that we will, over time, find the light within, that we will create, over time, the strength to bear all that must be born.

In the days since I discovered my little grief, since I let the sadness come and go and pass through me, I’ve been able to move on.

I’ve realized that for me, the magic of Christmas is about making magic for other people. So instead of focusing on my kids, I sunk some hours into tying bows on the pews and hanging suction cups on the windows here in the Sanctuary, so we could hang greenery this morning, during our hymn. Preparing that yule surprise for you all this morning — To me that was magic.

And also, like so many of you, I took names off of our Giving Tree and then this week bought holiday gifts this for residents of a domestic violence shelter. That felt good.

And of course we’re all giving money this to help settle refugees and asylum-seekers, and next Saturday groups of us are even going Carolling at care homes.

There are so many different ways to make magic for other people this Christmas!

I’ve realized that my kids are not my whole world any more, They are growing up and growing away and that’s as it should be. And so I give thanks.

When just a few days ago I came across Emily Dickinson’s poem, “We grow accustomed to the Dark,” it set me thinking about all those centuries that humans lived so much of their lives in the dark. And survived.

How many thousands of years did our ancestors live without fire, without candles? I don’t know. How long did it take them to figure out how the year worked, to understand that yes, the days do grew shorter and colder, but then, at one point, they turn and grow lighter and warmer again?

What a relief THAT must have been! Can you imagine?

No wonder we celebrated it so fervently for thousands of years. No wonder we built huge shrines like Stonehenge and Newgrange, to calculate the exact moment when the solstice would happen and the cycle would shift again. The sun WILL return! We know it! We can show it!

Even just 157 years ago, when Emily Dickinson wrote her poem, people had to cope with darkness, had to live with and travel in darkness so much more than we do now.

At the start of the poem, Dickinson imagines that she’s gone to visit a friend and now, after a pleasant evening, she steps out to leave, alone, on foot, into the utter darkness. She has no flash light, no car headlights, no cell phone to light the way.

She means tall, proud. We meet the road boldly.

Then in the next stanza Dickinson goes all metaphorical, figurative …

She means when you are struggling with inner darkness . . .

So yes, Dickinson is saying, we will bump into things. The bravest of us will get hurt. It’s true. And yet we persevere. Because we have to.

And either the darkness changes

My friends, the darkness surrounds us now. It closes in. And yes, for another week or so, it even gets worse. And then somehow, on the 22nd, the world turns. As our ancestors discovered somehow, the light starts coming back. Spring somehow always returns again and again. You can count on it, like clockwork.

Things fall apart, then they come back together. And fall apart again.

Like those ancestors we venture forth, into the dark, into the unknown future, because we have to. We bump our heads, yes, and curse. But we go forward anyway in faith, with faith.

And we light a candle when we can. We spread joy and magic wherever we can. We make room for grief and for joy. And ever time we venture forth, we grow stronger.

Let us today venture forth once more, boldly into the darkness, bearing the light as best we can, walking homeward, toward Springtime.

So may it be and Amen.De