Sheryl Sandberg knows all about the love that has no reply. 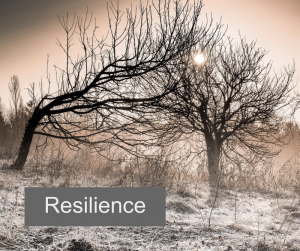 In 2015, just five years ago, her life was right on track. She was the very model of “having it all.” The COO of Facebook, Sheryl was at the top of her industry, and she’d also written a bestselling book, Lean In, about women and power, and to go with she had created a foundation to support women’s leadership around the world. In addition she was married to a man she loved, Dave Goldberg, who was then CEO of Survey Monkey, and together they were raising two elementary-school-aged children.

And then it happened.

Sheryl and Dave went away for the weekend. Leaving their kids with the grandparents in California, the two flew down to a resort in Mexico to celebrate a close friend’s 50th birthday. Sheryl remembers they were sitting near the pool, playing Settlers of Catan, their favorite game, when she decided to take a nap. An hour later, when she awoke, the others had left the poolside. Dave had said he wanted to go to the gym, so Sheryl went to their room to shower and change for dinner.

When she came down to dinner some time later and Dave still wasn’t around, Sheryl panicked. She and a friend ran to the gym. And they found him there, sprawled on the floor.

Dave had died from an undiagnosed arrhythmia. He was 47.

“When I lost Dave I felt like I was sucked into a void, I couldn’t quite breathe or think,” says Sandberg, “and trying to get out of that void, to feel like you could breathe again, like you could one day find joy,. find happiness, find sunshine, was an incredibly hard thing to do.

The first weeks and months were a blur to Sheryl. She and the children cried a lot. Sheryl worried that they would never recover from the loss.

Then her friend Adam Grant came to visit. Adam is a research psychologist at the Wharton school whom Dave had once hired to speak at his company. He had come over for dinner afterward, and then he built a friendship with the family.

After Dave’s death, Adam told Sheryl what he’d learned from the research about grief, resilience, and adversity, and he gave her some tools he thought might help.

They did. Over time, Sheryl used Adam’s tools to rebuild her life and to teach her kids and herself resilience. Then two years later she and Adam wrote another book, and built a website, to share those same tools with other people —people who are surviving loss and trauma,

or those trying to help survivors, or those who are just trying to build the resilience needed for everyday life in our complicated world. 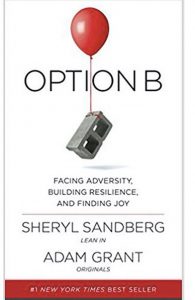 The book and the website are called Option B.  For people who can no longer have their first choice in life — the partner, the career, the path they dreamed of is gone. People who know have to learn to survive — and thrive — with Option B.

Are you one of those people?

More and more of us face loss every day. Because life is hard, and we are all aging. Because the middle class is shrinking, and both health-care and housing costs are sky-rocketing. Because college is expensive, and our kids are having a tough time finding their way. Because the planet is burning and democracy is broken, even more than we knew. Every day the news is more shocking.

So what do we do? How do we march on?

Our Theme for this month is Resilience, and our Sacred Word, which plays off of it and adds theological depth, is Grace.

What do these two words mean?

We can think about examples of resilience from all the world’s religions. There’s the Israelites, who survived hundreds of years of slavery, and then wondered in the desert for 40 years, led by Moses and Aaron and Miriam. There’s the example of Job, who survived so many devastating losses without losing faith. There’s Jesus and the temptations by Satan.

And there are many “scriptures” on resilience revealed in modern times, from life of Gandhi to the modern civil rights movement that we discussed here just a couple weeks ago. We can learn so much about resilience from our African American siblings, who endured and survived and thrived on these shores.

And yet our culture perpetuates such misunderstandings about the nature of resilience. Mistakenly we tend to think of it as a personal characteristic —something the individual demonstrates by long hours of hard work and all-out competition. But that’s not what the research says. The kind of resilience that actually sustains a person through tragedy and hardship is the resilience we build by using tools like rest, connection, and compassion. More on that in a minute.

And what about Grace?

If resilience is a set of skills you can build and use, grace is beyond that, outside of that. Grace is what happens when your tank of resilience has run dry, and you’re about to fall apart, and a little miracle comes by, just out of the blue.

In Christian theology, grace is equated with God’s love, which comes to help you and to save you, unbidden and unearned. Our Universalist forebears were among the first Christians to declare that grace and God’s love was for everyone, not just the lucky elite, but for every last soul. That’s our inheritance.

And of course our faith has a strong humanist strain too. Humanists would have a different take on grace. They might use “grace” to describe everyday miracles like a flash of beauty at just the right minute, like when you spy a bright cardinal hopping across the snow. Or when a stranger arrives in the nick of time, to help with groceries or a flat tire.

So it’s very fitting, kind of a little gift of grace, really, that last night, after a week of researching about Resilience, an acronym came to me, to share with you this morning. You see I wanted to be able to remember what I’d learned about resilience, and for you — maybe — to remember it too. So, while I was cooking my soup for today’s potluck, I was also boiling away the research in my brain, till I got it down to five elements. And I got those elements to line up into one word — G-R-A-C-E. Grace.

So here is my advice, five tools you can use to build real resilience in your self and in your kids.

G may be the hardest one. It stands for gratitude. You alll know that there’s all this research now that shows just how transformative gratitude can be in your life. But finding it when you’re suffering a loss can be so difficult.

On their Option B website, there’s a video where Sheryl and Adam recall this really powerful conversation they had, early in Sheryl’s grieving. Adam told her: “Remember, Sheryl, things could be worse.”

“What?” says Sheryl. “My husband just died suddenly, and you say that things could be worse? What do you mean?” she asks, clearly angry.

“Well,” says Adam. “Dave died of an undiagnosed arrhythmia.  You know that could have happened while he was driving, with your kids in the car.”

And you see Sheryl waving her arms, fighting back tears. “Oh no. I’d never thought of that. Instead of losing one in an instant, I could have lost all three. And now I am so grateful. For my health, for their health, for every birthday, every dinner, every moment.”

And Adam pushed Sheryl further. He challenged her to a journaling exercise. Write down three things you are grateful for every day. At first, all she could manage was, “got through a meeting without crying,” but over time, she developed a practice of seeing the positive that has changed her outlook on life.

I’m doing it, too, by the way. I bought a new journal for the new year, and every morning and every evening I have to write down three things I’m grateful for. And it’s not easy. Sometimes it’s the little things — my oatmeal, my pets — but I find that it opens the door then, and I actually then FEEL that I’m really truly grateful for my family, my job, and my congregation. It changes you.

And we’re also not taking enough days off or enough breaks during the day, time away from computers and phones, time spent interacting with real people and with nature. We need recovery time every day in order to build resilience.

A is for acceptance. Yes the Buddhists were right. Life is full of suffering, and accepting that way can be the first step toward compassion for yourself and for others. You can let go of all the blame and just allow that life involves suffering. Accept it.

C is for Connection. We are not lone wolves. We build resilience with one another, with family and friends and congregations. We take turns caring for one another and accepting others caring for us.

Sheryl talks about how painful it was when people asked her “How are you?” She wanted to scream back at them, “My husband just died. How do you think I am?” Over time, she learned to tell her friends to say instead, “How are you today?” For Sheryl that phrasing felt different. It felt like were acknowledging her loss, they were say they knew she was suffering over all and they wanted to know how it was going today. It made a difference.

We need each other. Connection makes us stronger.

E, the last tool, stands for Elasticity, giving yourself the space to bounce back. Early in her greiving, Sheryl said that she knew she would never feel real joy again. But Adam stopped her. He said that the research shows humans are really bad at what’s called “Affective Forecasting.” We tend to think we will feel much worse for much longer than we actually do. Saying you will never feel joy makes you believe it and then stop doing the things that make you feel joy. It’s a self-fulfilling prophecy.

Over time Adam helped Sheryl stop saying words like “never” and “always” about her feelings. She started to substitute “sometimes” and “recently” and give herself the space to bounce back to feeling better.

So that’s GRACE, five tools for building resilience, for tragedy and for survival everyday in a world that feels crazy sometimes.

Building resilience is not just self-help, it’s self-preservation. So that we may live to fight again, to build the resistance tomorrow. So we can help our children face the future.

“It’s not the weight you carry

but how you carry it –
books, bricks, grief –
it’s all in the way
you embrace it, balance it, carry it

when you cannot, and would not,
put it down.”

We all carry grief, for the past and those we have lost,

for the present and all that is broken,

and for the future our children will inherit.

If we must carry it all, let us carry it together,as one church body, one family of friends. All hurting and all holy. All resilient and still learning,  stronger every day, walking and working still toward the dream of a better tomorrow.