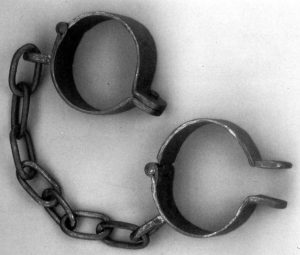 STORY: “Litany of the Generations” by Gail Forsyth-Vail and James C. Leach

Today we are commemorating an important anniversary. It was 400 years ago that the first Africans were brought to this continent, the one we now call America. Today we’ll try to imagine what 400 years looks like, measured in people. We’ll be making a human timeline.

(One at a time, 17 volunteers come forward to make a line across the front of the Sanctuary.)

They say our people were born on the water.

When it occurred, no one can say for certain. Perhaps it was in the second week, or the third, but surely by the fourth, when they had not seen their land or any land for so many days that they lost count. It was after the fear had turned to despair and the despair to resignation and the resignation gave way, finally, to resolve.

They knew then that they would not hug their grandmothers again, or share a laugh with a cousin during his nuptials, or sing their baby softly to sleep with the same lullabies that their mothers had once sung to them. The teal eternity of the Atlantic Ocean had severed them so completely that it was as if everything they ever knew had simply vanished from the earth.

Some could not bear the realization. They heaved themselves over the walls of wooden ships to swim one last time with their ancestors. Others refused to eat, mouths clamped shut until their hearts gave out. But in the suffocating hull of a ship called the White Lion, bound for where they did not know, those who refused to die understood that the men and women chained next to them in the dark were no longer strangers. They had been forged in trauma. They had been made black by those who believed themselves to be white. And where they were headed, black equaled ‘slave.’ So these were their people now.

In August 1619, just 12 years after the English settled Jamestown, Va., one year before the Puritans landed at Plymouth Rock and some 157 years before the English colonists even decided they wanted to form their own country, the Jamestown colonists bought 20 to 30 enslaved Africans from English pirates. The pirates had stolen them from a Portuguese slave ship that had forcibly taken them from what is now the country of Angola. Those men and women who came ashore on that August day were the beginning of American slavery. They were among the 12.5 million Africans who would be kidnapped from their homes and brought in chains across the Atlantic Ocean in the largest forced migration in human history until the

The chief families were among the chief slavers. Cornelius Waldo, relative of Unitarian minister Ralph Waldo Emerson, was a slave merchant on a large scale. His ship, Africa, plied the Middle Passage packed with 200 black people at a time crammed below-decks. Peter Fanueil, meanwhile, inherited one of the largest fortunes of his day, which was built in large part on his uncle’s slave trade. His philanthropy gave Boston its famed Fanueil Hall.

We don’t know much about practices here in Melrose, which in those days was part of Malden. But we do know that in neighboring Medford, in 1734, 27 enslaved people were held by the merchant Isaac Royall. Some of their names: Joseph, Plato, Phebe, Abraham, Cooper, Stephy, George, Nancy and Betsey.

Slavery and the American Economy words (edited) by Matthew Desmond, from the New York Times 1619 Project

Slavery was undeniably a font of phenomenal wealth. By the eve of the Civil War, cotton grown and picked by enslaved workers was the nation’s most valuable export.

Cotton was to the 19th century what oil was to the 20th: among the world’s most widely traded commodities. .. . But cotton needed land. A field could only tolerate a few straight years of the crop before its soil became depleted.

The United States solved its land shortage by expropriating millions of acres from Native Americans, often with military force, acquiring Georgia, Alabama, Tennessee and Florida. It then sold that land on the cheap — just $1.25 an acre in the early 1830s ($38 in today’s dollars) — to white settlers.

Enslaved workers felled trees by ax, burned the underbrush and leveled the earth for planting. As slave labor camps spread throughout the South, production surged. By 1831, the country was delivering nearly half the world’s raw cotton crop, with 350 million pounds picked that year. Just four years later, it harvested 500 million pounds.

Southern white elites grew rich, as did their counterparts in the North, who erected textile mills, which propelled the Industrial Revolution and changed the course of history. Cotton planters, millers and consumers were fashioning a new economy, one that was global in scope. The beating heart of this new system was slavery.

If today America promotes a particular kind of low-road capitalism — a union-busting capitalism of poverty wages, gig jobs and normalized insecurity; a winner-take-all capitalism of stunning disparities; a racist capitalism that ignores the fact that slavery didn’t just deny black freedom but built white fortunes— one reason is that American capitalism was founded on the lowest road there is.

On Aug. 14, 1862, President Abraham Lincoln called a group of five esteemed free black men to the White House for a meeting. It was one of the few times that black people had ever been invited to the White House.

The war was not going well for Lincoln. The president was weighing a proclamation to emancipate all enslaved people. But Lincoln worried about what the consequences of this radical step would be.

After exchanging a few niceties, Lincoln got right to it. He informed his guests that he had gotten Congress to appropriate funds to ship black people, once freed, to another country.

You see, like many white Americans, Lincoln opposed slavery but he also opposed black equality. He believed that free black people were a “troublesome presence” incompatible with a democracy intended only for white people. “Free them, and make them politically and socially our equals?” he had said four years earlier. “My own feelings will not admit of this; and if mine would, we well know that those of the great mass of white people will not.”

After that meeting, the five black leaders made it clear that they were not interested in taking Lincoln up on his offer to leave the country of their birth. By choosing to stay, black people were saying, this is our country. We are American, and we’re actually going to work to make these founding ideals a reality.

The Legacy of Slavery  words (edited) by Nikole Hannah-Jones, from the New York Times 1619 Project

The United States is a nation founded on both an ideal and a lie. Our Declaration of Independence proclaims that “all men are created equal” and “endowed by their Creator with certain unalienable rights.” But the white men who drafted those words did not believe them to be true for the hundreds of thousands of black people already in their midst. “Life, Liberty and the pursuit of Happiness” did not apply to fully one-fifth of the country.

Yet despite being violently denied the freedom and justice promised to all, black Americans believed fervently in the American creed. Through centuries of black resistance and protest, we have helped the country live up to its founding ideals. Under Reconstruction, African Americans, finally and only briefly serving in Congress, pushed for the 13th, 14th, and 15th amendments, which opened up rights to citizenship, voting, and non-discrimination beyond white men. 100 years later, during the Civil Rights era, black Americans forced America to uphold those rights. These black struggles paved the way for every other rights struggle, including women’s and gay rights, immigrant and disability rights.

Without the idealistic, strenuous and patriotic efforts of black Americans, our democracy today would most likely look very different — it might not be a democracy at all.

When I was a child — I must have been in fifth or sixth grade — a teacher gave our class an assignment intended to celebrate the diversity of the great American melting pot. She instructed each of us to write a short report on our ancestral land and then draw that nation’s flag.

As she turned to write the assignment on the board, the other black girl in class locked eyes with me. Slavery had erased any connection we had to an African country, and even if we tried to claim the whole continent, there was no “African” flag. It was hard enough being one of two black kids in the class, and this assignment would just be another reminder of the distance between the white kids and us. In the end, I walked over to the globe near my teacher’s desk, picked a random African country and claimed it as my own.

I wish, now, that I could go back to the younger me and tell her that her people’s ancestry started here, on these lands, and to boldly, proudly, draw the stars and those stripes of the American flag.

RITUAL  “The Deep Well of Black Lives” by the Rev. Kristen L. Harper