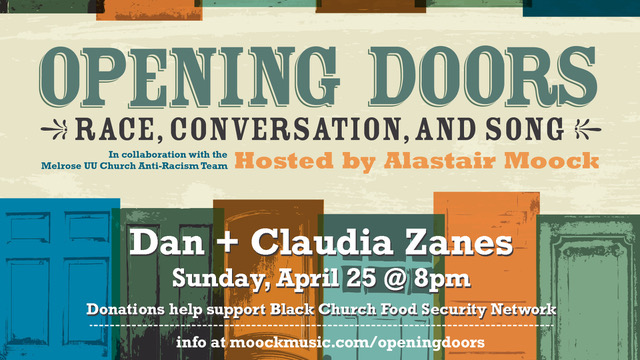 Opening Doors is a new music and interview series hosted by Alastair Moock and presented in collaboration with our Anti-Racism Team. The series launched on Sunday, March 28 at 8pm, and features top national and largely BIPOC talent playing music and discussing issues related to diversity, equity and inclusion –– within the music industry and beyond.

Guest musicians will be paid a guarantee by the church and, additionally, will split online donations with an advocacy/charity organization of their choice. Shows stream live on Facebook and YouTube.

The performance on Sunday, April 25 at 8pm features Dan & Claudia Zanes. Dan, a founder of The Del Fuegos, went on to launch a solo career, and emerged as “the Gold Standard in kid’s music” (NPR). He co-founded Constructive White Conversations, an anti-racist White affinity group in NYC. Half the show’s proceeds go to the Black Church Food Security Network.”